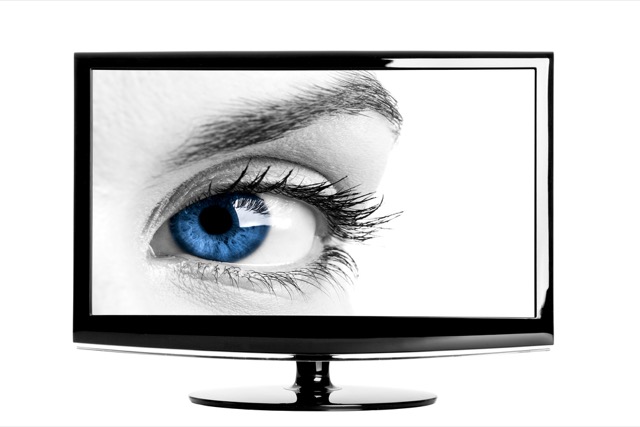 Reverse Imaging Technology (R.I.T.) which is Bidirectional Audio & Image Transmission (B.A.I.T.) – Both coined by: Website Publishers. Also called Visible light communication – V.L.C., which incorporates many methods for turning your Monitor or TV into an Image Capturing Device  (I.C.D.). The latest and greatest method for this purpose is the use of Li-Fi – See Cold Fusion Video visible light communication (VLC). LED Lighting – Light-Emitting-Diodes, which is the conduit for the broadcast transmissions of thousands of data streams, bidirectionally, to send and receive (Data and Images) through and from light; a hundred times faster than Wi-Fi. At transmission speeds up to 224+ Gbps (gigabytes per second) and higher depending on the method and application of the R.I.T. being used.  Read More

Li-Fi utilizes L.E.D. light and as we have all been told….  light is believed and suppose to travel 186,000 miles per second (different lights travel at different speeds). However, the broadcasting transmission speeds can vary and be impeded when used in conjunction with electrical wires, cable lines and the like. Not so when fiber optics or cables are used. So mostly at or near the speed of light, data transmissions VLC – Li-Fi is operational and is sent and received bidirectionally right through our display units (computer monitors & TVs) basically any LED display unit.

Yes we said it…. data and captured images are being transmitted right through the LED display units (back and forth – bidirectionally) Duplex if you will! and carried with Li-Fi and other methods (mentioned below) by way of fiber optics,  electrical lines, cable lines – internet, even radio. Smart meters can and do assist in coordination with certain RITs and remote control is often employed. Talk about advanced mass surveillance !

The following video by Coldfusion touts Li-Fi as a new & superior method of transmitting data through thousands of data streams within the LED light. If you pay close attention to the demonstration of the HD video being displayed upon the screen and the freezing of it when blocking the LED light by the Dr.s hand, it is clear that a recorded video / data can and is being streamed / transmitted with Li-fi as the conduit. It is amazing!

What they didn’t show us is that even our images are being picked up / captured by the Back Panel – IN-REAL-TIME –  LIVE – … by whatever Imaging Capturing Device  I.C.D.s are utilized. Basically, all display units are now effectively turned into a camera, sending and receiving like live television broadcast transmissions. This is all possible of course if you’re one of the few who holds the knowledge, the codex, the control panel and navigation buttons. Basically, the right hardware but most importantly…. the software ! Either way… data and/or actual images…  the transmission is taking place and images are sent and received recorded or live !! Think about it.

The older Reverse Imaging technology(s) *Still being used are many, and in sharing with several developers, “in the know” they have not only confirmed our discovery but say there’s over 100 ways this has been done for some time. 15 to 20 years now. To name just a few:…. the virtucam – an invisible camera or rather… a “virtual camera” which is nothing more than a installed computer program. Sometimes pushed to a unsuspecting target’s computer, TV or display unit by way of data packet.

Many times, a flash “magic” cookie – with instruction to send the targets OS and location – is dropped on the target(s) hard drive so that the virtucam software which is the codex, config, and auto executing files can be pushed to their location, zeroing in on their IP & Mac address by any and all previously mentioned methods, usually through the internet to complete the RIT-BAIT installation allowing for continuous instruction from the sender; usually for the purposes of visual / audio transmission reception.

Some of the software used to write B.A.I.T. is Picture Tools for one and HTML 5 which allows us to capture both video, Images and audio from the device camera or rather virtual device camera . Virtucam is one of the names used (Scrubbed from web) The Window.navigator.getUserMedia function assists virtucam to emulate into a camera then renders the camera functions operational.

The virtucam emulator software rendering is splashed onto the display panel ie monitor, TV and the like for video streaming with either the built in media player or by way of li-fi transmission or other forthcoming RITs. virtually turning your display unit into a Image Capturing Device ICD. TVs are spying on all of us right now !  My question is…. Who is watching the watchers ? Would you like the codex, control panel and navigation buttons making it possible to check up on the watchers ? Reverse engineering or rather applying the many logical methods to do so shouldn’t be that tough. Providing one had the time, the assistance and the ware with all.

The transparent canvas method is a clear canvas laid over GIF images. GIF images because they have the ability to carry (codex / files / commands with them) and are usually on a website, a blog post or page or even a display units wallpaper on the personal display settings and what have you. When one brings up the page with the GIF picture on it, or has wall paper encoded even screensavers can have this… the auto config executes codex with the command to stream video and or capture the image by whatever RITs are presently available on the targets electronic components. It has been said that Google has long ago deployed the transparent canvas overlay on its Chrome browser. Something to think about there ha ?

Then there’s the “Back Panel with “Image Sensors”  U.S. Patent publication number US8587682 which is hardened in behind the display units panel that act as an camera like shutter, capturing all images in front of it. The LED panel, L.E.D (Light Emitting Diode) TVs use led back panel lighting, LEDs produces the light spectrum infrared which is invisible to the human eye but very detectable by the led itself as led diode can send and receive infrared light.

Using this reverse imaging technology combined with a grid array i.e your led display becomes an actual Image Capture Device or I.C.D as the led back panel is running @ 60 to 120+ htz behind the display panel, As infrared light beams out from your display and bounces of everything in the room and reflects back to the L.E.D and boom video of the room in real time… capturing all images in front of it and streaming video back to the “headquarters” or whomever has the codex and technology to manipulate it.

“They” have the control panel and navigation buttons at their fingertips for whomever or whatever they desire to see and hear. Another is the Remote Observing method, which is rather complex as compared to the technology of the “Holy Grail “Li-Fi” … the latest method in using light to see in your home and hear everything!

Here’s an app that makes it possible to see, hear, record and many other things with a cell phone thetruthspy. For the Droid os…. it is the badgeprovider system app that makes most spying possible (other than “untold” R.I.T.s controlled predominantly by the left) One can simply stop the badgeprovider system app to stop the known spying, but so far… we are not aware of any methods at this time that could be used to stop B.A.I.T., R.I.T.s other than to use a two way mirror for starters. Maybe that will be a new future security product people may want to stay off reverse imaging technology. Tape over the built in cameras just isn’t cutting it.

The StingRay Is Exactly Why the 4th Amendment Was Written >> Stingray

An “out-of-the-box” theory is that our emotions can be picked up, sent/send and felt/received. Yet… on the other hand… maybe it’s not so unbelievable. The ole saying goes…. “The older I get… the more I realize that truth really is stranger than fiction” It is also speculated and theorized that the powers that be are recording everything everywhere for the purposes of determining plausible future events. Applications of such matrix recordings are constantly pushed to very powerful virtual supercomputers then fast forwarded as a way to predict and determine future outcomes and possible events.

The recordings ” Matrix Detail ” is also a way for “them” to pull up any past & recent recordings for the purposes of generally using them against anyone should they be suspect in any nefarious activity. Also, this recording of everything is necessary for the extrapolating what people typically do in certain instances, things in certain states and how our responses would be typical of natural behavior and logical movement most commonly enacted or brought about as a result of interaction with whatever is around it. Trust and believe…. we’re all on candid camera !

Time as we know it within these virtual matrix’s has no meaning as it does to us and the recordings of “we the people” actually take on a persona of their own because of the virtual complexities developed from within the matrix. Artificial Intelligence – A.I. ? Yes… our virtual selves know where they are and have a form of self awareness of their own. And….. Get this….. they know about us!

The internet has been scrubbed pertaining to Reverse Imaging Technology (R.I.T.) as well as many other types of disruptive technologies and kept by the globalist elite / deep state for their own selfish and devious means. Even our cosmology has been one big lie ! Several here have experienced R.I.T. (s) first hand ! This isn’t rocket science any longer folks. It’s actually happening and “The future is now” We’re learning of more hidden and secret technologies all the time and plan of disclosing as we go.