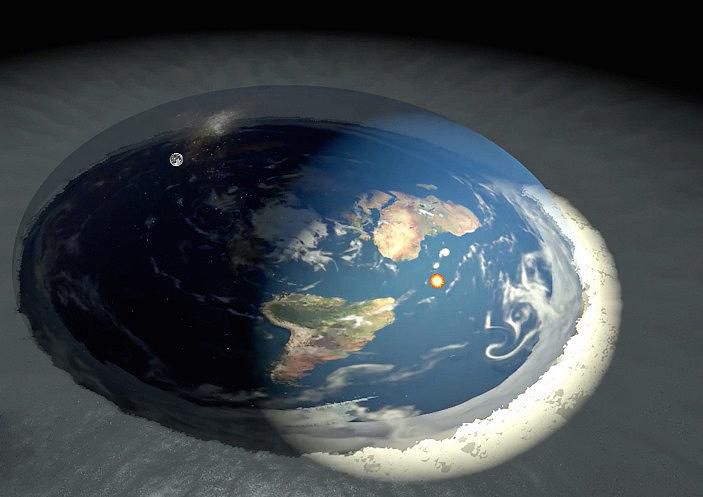 November 7, 2019May 30, 2021
@@admin
Leave a Comment on Salvation for Flat Earthers Believing in Flat Earth

What concerns me with people believing the global model lie is that its likely a salvation issue. There is “accountability” involved! Scripture says he will send non believers strong delusion 2 Thessalonians 2:11 King James Version (KJV) 11 And for this cause God shall send them strong delusion, that they should believe a lie: and damned those that refuse his truth… His word… His scripture. “In the beginning God created Heaven and Earth” 12 That they all might be damned who believed not the truth, but had pleasure in unrighteousness. John 14:6  Jesus said to him, “I am the way, the truth, and the life. No one comes to the Father except through Me. Looks like truth is important !

Its looking like Believing the TRUTH about Gods Creation is fundamental to our salvation and the very foundation of our world beliefs. All other beliefs branch off from this truth “Creation” in the beginning from God. If you believe in the global model lie…. your world outlook and actions are based on this deception, and skews the way God would have us go. This is a week foundation full of many other deceptions which are encompassed under this umbrella & grand daddy of all lies. The global model is truly the biggest lie ever perpetuated upon man kind. Find out why they have been hiding our God. and using scientism to deceive us.

*** Basically, if you believe in the global model lie… (with no empirical evidence) – only “theory” brought about predominately by the Jesuit Priests … you are taking it on FAITH that earth is a spinning ball and all that goes along with the heliocentric model. This “faith” is a religion or a form of worshiping Helios the Priests sun god also known as Apollo – or as many say… Satin. This is egregious to the real God Jehovah / Yahweh the only creator of everything that is and thus making accountability a real concern. THE JESUITS OWNERS OF THE 500 YEAR-OLD FLAT EARTH HIDDEN SECRET

Question: “Why is God sending a strong delusion in the end times?”

Answer: The Bible makes it clear why God is sending a strong delusion in the end times: “They perish because they refused to love the truth and so be saved. For this reason God sends them a powerful delusion so that they will believe the lie and so that all will be condemned who have not believed the truth but have delighted in wickedness” (2 Thessalonians 2:10-12). Simply put, God sends a strong delusion to those who chose not to believe the gospel of Christ. Those who take delight in mocking and rejecting Him, He will condemn.

It is man’s choice whether to accept and believe the truth of Jesus Christ as presented in the Scriptures. To receive the truth and the love God offers is in keeping with its teachings, “This is love for God: to obey His commands” (1 John 5:3). Conversely, to know the truth and not obey it is to face the wrath of God: “The wrath of God is being revealed from heaven against all the godlessness and wickedness of men who suppress the truth by their wickedness” (Romans 1:18). Frankly speaking, there is no more dangerous condition for man than to know the truth and refuse to obey it. To do so is to harden the heart and make God’s condemnation sure.

When one knows the truth and refuses to obey it, he is subject to any lie, any deception, any untruth that man can conjure up. “For although they knew God, they neither glorified Him nor gave thanks to Him, but their thinking became futile and their foolish hearts were darkened. Although they claimed to be wise, they became fools” (Romans 1:21-22). Paul goes on in the next few verses to describe the mindset and behaviors of those who disbelieve (see Romans 1:29-31). As a result of man’s foolishness and his arrogant disdain of the things of God, “God gave them over to a depraved mind, to do what ought not to be done” (Romans 1:28). And correspondingly, “Although they know God’s righteous decree that those who do such things deserve death, they not only continue to do these very things, but also approve of those who practice them” (Romans 1:32).

Isaiah puts it succinctly: “They have chosen their own ways, and their souls delight in their abominations; so I [God] also will choose harsh treatment for them and bring upon them what they dread. For when I called, no one answered, when I spoke, no one listened. They did evil in My sight and chose what displeases Me” (Isaiah 66:3-4).

When men know the truth and refuse to receive it, when they refuse to obey it and hold it in unrighteousness, “they will be condemned for enjoying evil rather than believing the truth” (2 Thessalonians 2:12 NLT).

“God is love” (1 John 4:16). He is not some cruel monster who deliberately and inwardly delights in preparing people for everlasting condemnation. But He earnestly and lovingly proclaims the gospel of Christ, “not wanting anyone to perish, but everyone to come to repentance” (2 Peter 3:9).

Throughout the Scriptures, God urges people to accept the truth. But when people reject Him and spurn His message, then—and not until then—God hardens them and turns them over to a deluded mind to wallow in their wickedness to their eternal damnation. This is what the Lord says about those who choose to reject the truth: “They greatly love to wander; they do not restrain their feet. So the Lord does not accept them; He will now remember their wickedness and punish them for their sins” (Jeremiah 14:10).

Many in the flat earth community have reached out to scientists with a challenge to debate our cosmology. So far… the response is deafening. They say science is settled yet cannot come up with any scientific methods and deny the deception. They only offer up theory. Research the information below to find out why your salvation may likely depend on your belief and who is behind this evil deception as well as hundreds of proofs / evidence that we are not on a spinning ball.

There are “floodgates” (windows) in the firmament: Actually just one verse in the Bible proves a flat earth! And that is in Genesis 1 where it talks about a firmament and God separate the waters above from the waters below! Why is the sky blue?use logic!!!
Gen. 7:11; 8:2; 2 Kings 7:2-19; Mal. 3:10

For the wisdom of this world is foolishness with God. For it is written, He taketh the wise in their own craftiness. 1 Corinthians 3:19

The Earth Is Flat

See how fast “They Say” your moving > here <    The Earth is Flat. Flatter than a chocolate chip cookie ! Excellent read

Viewing Distance / Sun & Viewing prospective and vanishing point info. The sun is NOT a gas giant.. it is an electromagnetic nexus prism of light. It is not 3k miles up.. and it is not seen all around the FE at the same time. It has a limited range of light.